Violinist Mary Grace Johnson commissioned Accession for her second master’s degree recital at the Juilliard School. The narrative of these three movements traces my personal journey in composition. The first movement, “Without Worry,” represents my initial attitude when writing music in elementary and middle school: a joyful, child-like lack of self-consciousness in which any compositional frustrations originated from external sources (such as a lack of musical knowledge and exposure), rather than internal sources (such as a lack of self-confidence). “Partial Paralysis,” the second movement, embodies the crippling, sudden self-awareness I experienced in high school and my first year of undergraduate studies, when I became reticent to let anyone hear my work. The final movement, “Becoming Bold,” describes the gradual process through which I eventually gained an informed confidence in my work. 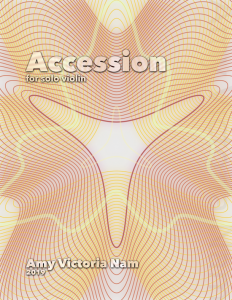 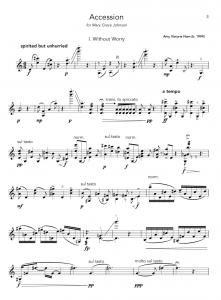