Premiered on Echo Chamber’s 2021 Secret Sequenzas series, “Diffusion” is my musical response to Laura Lajber’s watercolor, “a conversation in the snow.”

In performance, the musician plays as another (pre-recorded) track also plays, so that an interchange arises between the embodied and disembodied sounds. The disembodied sound tends to precedes the performer; when the performer enters the existing sound, it’s as though the performer is breathing the sound in and then responding with a long, reverberant exhale. Gentle stereo panning creates the illusion that the embodied and disembodied sounds are drifting through space relative to one another, like swirling air currents. Through the use of reverb and long musical lines, I hope to convey the painting’s sense of vastness and simplicity. 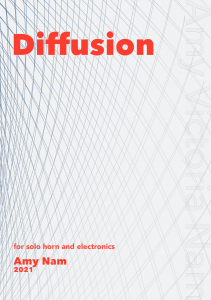 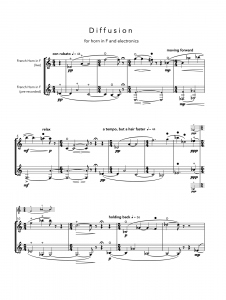